This article is about the film adaptation. For the novel, see Coraline.

This article is a stub. You can help LAIKA Films Wiki by expanding it.

Coraline is a 2009 American 3D stop-motion dark fantasy horror film based on Neil Gaiman's 2002 novel of the same name. It was the first feature film produced by Laika and was distributed by Focus Features. The film depicts an adventurous girl finding an idealized parallel world behind a secret door in her new home, unaware that the alternate world contains a dark and sinister secret. Written and directed by Henry Selick, the film was made with Gaiman's approval and co-operation.[1]

Coraline Jones and her parents move from Pontiac, Michigan, to their new home in Ashland, Oregon, the dilapidated Pink Palace Apartments. Her eccentric new neighbors include Mr. Bobinsky, Miss Spink and Miss Forcible. Due to her parents constantly working, Coraline frequently explores the apartment. Whilst exploring, she meets a black cat and Wyborne "Wybie" Lovat, the grandson of the landlady, whose twin sister mysteriously disappeared years ago. later,Coraline returns home and suggests that it's perfect time for gardening but her mother isn't convinced and says, "Rain makes mud and mud makes a mess." However, Wybie gives Coraline some gift that has a button-eyed ragdoll that resembles her.

The doll then lures her to a small door in the living room, which is bricked up and can only be unlocked by a button key. That night, a mouse guides her through the door, where the bricks have been replaced by a corridor to the Other World, inhabited by button-eyed doppelgängers of people from her world. Coraline meets the Other Mother and Other Father, who are much more attentive and entertaining than her real parents.

After dinner, she goes to sleep in her Other Bedroom, but awakes in her real bedroom. Despite cryptic warnings from her neighbors, Coraline visits the Other World three times, where she meets the Other Mr. Bobinsky, the Other Miss Spink and Miss Forcible, and the Other Wybie, who is mute. Despite having no Other World counterpart, the black cat is able to speak in the Other World.

The Other Mother invites Coraline to stay forever, under the condition that a pair of buttons will be sewn over her eyes. Terrified, Coraline attempts to flee, but the Other Mother sees through her plan and blocks all the exits to the real world. The cat reappears and reveals to her the sinister truth about the Other World and the Other Mother. The Other Mother, appearing taller and more grotesque, then "disciplines" Coraline by imprisoning her behind a wall. There, Coraline meets the ghosts of previous victims, including the missing twin sister of Wybie's grandmother. They reveal that the Other Mother, whom they refer to as the Beldam, created and sent button-eyed rag dolls that resembled them in order to spy on their lives. With the promise of a better life, she lured them into the Other World, where she sewed buttons over their eyes and consumed their lives. To free their souls, their real eyes need to be found. Coraline promises to help.

Coraline is suddenly rescued from the mirror by the Other Wybie, whose mouth has been stitched by the Beldam. He helps her escape back to the real world, but Coraline discovers that her parents are missing. She eventually deduces that they have been kidnapped by the Beldam and returns to the Other World, but not before Spink and Forcible grant her a stone with a hole in it. The cat advises Coraline to propose a "game": if Coraline cannot find her parents and the ghosts' eyes, she will let buttons be sewn over her eyes, but if she can, they will all be set free. The Beldam accepts the request, amused. But before the games starts, Coraline demands a clue and the Other Mother gives her one.

"In each of three wonders, I've made just for you, a ghost's eye is lost in plain sight." — Beldam.

Using the stone, Coraline finds the ghosts' eyes in the Other World, now turned nightmarish, from its deranged inhabitants. As she does, the Other Pink Palace Apartments' surroundings gradually disintegrate until only the living room is left. Inside, Coraline sees the Beldam in her arachnoid form. Warned that the Beldam will never accept Coraline's victory, she tricks her into unlocking the door. While the Beldam is distracted, Coraline finds her parents trapped in a snow globe, grabs it, and throws the cat at the Beldam's face, ripping her button eyes out. The Beldam furiously converts the floor into a spiderweb but Coraline manages to climb out of it, slam and lock the door shut on the Beldam's hand, severing it. Her parents reappear in the real world, with no memory of what happened. That night, the ghosts warn her to get rid of the button key to prevent the Beldam from accessing the real world. As Coraline prepares to drop it down the well, the severed hand attacks her and tries to drag her back to the Other World. Wybie smashes it with a rock, then throws the remains and the key into the well and seals it shut to prevent anyone else from entering the Other World.

The next day, Coraline and her parents, who have finally finished their work, host a garden party for the neighbors. Coraline also prepares to tell Mrs. Lovat the truth about her twin sister.

"Coraline was a huge risk. But these days in animation, the safest bet is to take a risk." — Henry Selick

Director Henry Selick met author Neil Gaiman just as he was finishing the novel Coraline, and given that Gaiman was a fan of Selick's The Nightmare Before Christmas, he invited him to a possible adaptation of the film. As Selick thought a direct adaptation would lead to "maybe a 47-minute movie", his screenplay had some expansions, such as the creation of Wybie. When looking for a design away from the style seen in most animation, Selick discovered the work of Japanese illustrator Tadahiro Uesugi and invited him to become the concept artist. One of Uesugi's biggest influences was on the color palette, which was muted in reality and more colorful in the Other World.[4] Uesugi declared that "at the beginning, it was supposed to be a small project over a few weeks to simply create characters; however, I ended up working on the project for over a year, eventually designing sets and backgrounds, on top of drawing the basic images for the story to be built upon."[5]

Coraline was staged in a 140,000-square-foot (13,000 m2) warehouse in Hillsboro, Oregon.[6][7] The stage was divided into 50 lots,[8] which played host to nearly 150 sets.[6] Among the sets were three miniature Victorian mansions, a 42-foot (12.8 m) apple orchard, and a model of Ashland, Oregon, including tiny details such as banners for the Oregon Shakespeare Festival.[7] More than 28Template:Clarify animators worked at a time on rehearsing or shooting scenes, producing 90–100 seconds of finished animation each week.[9] To add the stereoscopy for the 3D release, the animators shot each frame from two slightly apart camera positions.[4]

Every object on screen was made for the film.[4] The crew used three 3D printing systems from Objet in the development and production of the film. Thousands of high-quality 3D models, ranging from facial expressions to doorknobs, were printed in 3D using the Polyjet matrix systems, which enable the fast transformation of CAD (computer-aided design) drawings into high-quality 3D models.[10] The puppets had separate parts for the upper and lower parts of the head that could be exchanged for different facial expressions.[4] The characters of Coraline could potentially exhibit over 208,000 facial expressions.[10] Computer artists composited separatedly-shot elements together, or added elements of their own which had to look handcrafted instead of computer-generated – for instance, the flames were done with traditional animation and painted digitally, and the fog was dry ice.[4]

At its peak, the film involved the efforts of 450 people, animators and digital designers in the Digital Design Group (DDG) directed by Dan Casey and more than 250 technicians and designers.[7] One crew member, Althea Crome, was hired specifically to knit miniature sweaters and other clothing for the puppet characters, sometimes using knitting needles as thin as human hair.[6] The clothes would also simulate wear using paint and a file.[4] Several students from The Art Institute of Portland were also involved in making the film.

The film was released in the United States on DVD and Blu-ray on July 20, 2010 by Universal Studios Home Entertainment. A 3-D version comes with four sets of 3-D glasses—specifically the green-magenta anaglyph image.

Coraline was released in the United Kingdom on DVD and Blu-ray on October 12, 2010. A 3-D version of the film was also released on a 2-Disc Collector's Edition.

A two-disc Blu-ray 3D set which includes a stereoscopic 3D on the first disc and an anaglyph 3D image was released in 2011.

The website for Coraline involves an interactive exploration game where the player can scroll through Coraline's world. It won the 2010 Webby Award for "Best Use of Animation or Motion Graphics," both by the people and the Webby organization. It was also nominated for the Webby "Movie and Film" category.

On June 16, 2009, D3 Publisher announced the release of a video game based on the film. It was developed by Papaya Studio for the Wii and PlayStation 2 and by Art Co. for Nintendo DS. It was released on January 27, 2009, close to the film's theatrical release.

According to Paul Dergarabedian, a film business analyst with Media by Numbers, for the film to succeed it needed a box office comparable to Wallace & Gromit: The Curse of the Were-Rabbit, which grossed $16 million its opening weekend and ended up making more than $192 million worldwide; prior to the film's release, Dergarabedian thought Laika "should be really pleased" if it made close to $10 million on its opening weekend.[7] In its US opening weekend, the film made $16.85 million, ranking third at the box office.[3] It made $15 million on its second weekend, bringing its U.S. total up to $35.6 million, $25.5 million of which coming from 3D presentations.[11] As of November 2009, the film had grossed $75,286,229 in the United States and Canada and $49,310,169 in other territories, making a total of $124,596,398 worldwide.[12]

On review aggregator website Rotten Tomatoes, the film holds an approval rating of 90% based on 262 reviews, with an average rating of 7.4/10. The website's critical consensus reads, "With its vivid stop-motion animation combined with Neil Gaiman's imaginative story, Coraline is a film that's both visually stunning and wondrously entertaining."[13] On Metacritic, the film has a weighted average score of 80 out of 100, based on 38 critics, indicating "generally favorable reviews".[14]

David Edelstein said the film is "a bona fide fairy tale" that needed a "touch less entrancement and a touch more... story".[15] A. O. Scott of The New York Times called the film "exquisitely realized" with a "slower pace and a more contemplative tone than the novel. It is certainly exciting, but rather than race through ever noisier set pieces toward a hectic climax in the manner of so much animation aimed at kids, Coraline lingers in an atmosphere that is creepy, wonderfully strange and full of feeling."[16] 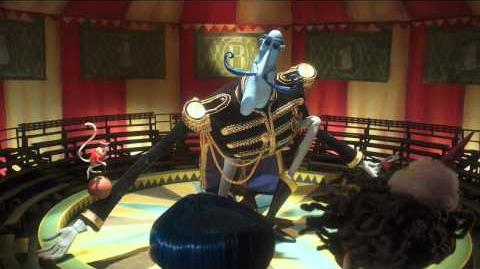 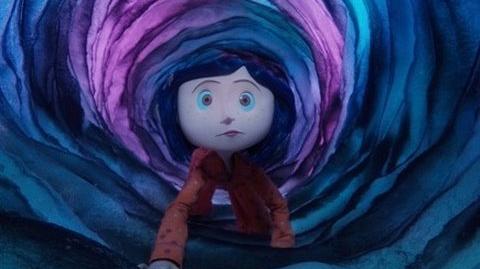 Retrieved from "https://laikafilms.fandom.com/wiki/Coraline_(film)?oldid=5224"
Community content is available under CC-BY-SA unless otherwise noted.